When I started this blog, I didn’t really see myself doing a whole lot of shoe reviews. There are (better) sites devoted to that (see, for example, Runblogger) and I tend to stick with the several shoe models that work for me. Several years ago, while suffering from painful plantar fasciitis in both feet, I made the switch to minimalist shoes and completely revamped my running form. I now (well, until several weeks ago…I’ll explain) alternate between a pair of Nike Zoom Streak XC 3s and the original Nike Lunar Racers (harder and harder to find…grrrrr). The Streaks are almost zero drop, extremely light, and are almost always on sale somewhere, so they are inexpensive. The update that Nike recently made was improving the tongue of the shoe – it is now padded and doesn’t bunch up at the sides –– and changing the name of the shoe and the colors (although it looks like the most recent release has changed the mesh…hmmm). The essentials of the shoe, however, haven’t changed (yay!).  If I had a direct line to Nike, I would suggest removing the Zoom Air in the heel –– I would be surprised if there are any heel strikers who wear this shoe for more than several minutes –– for some additional weight saving. Of course, if they did that, they would have just about reinvented the best racing flat of all time, the Nike Eagle. Anyway, going minimal and becoming a forefoot and midfoot striker changed my running for the better: I got faster, my knees stopped hurting, that weird click in my left knee went away, my feet stopped hurting, and I didn’t have to take a day off of running every other day. I began to evangelize for minimalist running.

Now, I’m going to shock you. This blog entry is an enthusiastic endorsement of the Hoka One One Bondi Bs. Not exactly a minimal shoe. My family initially called them “the clown shoes,” as did I. Ultra marathoners and runners recovering from injuries have embraced the exaggeratedly cushioned Hokas. I had seen some very enthusiastic online reviews and was intrigued, although the price was initially off-putting. Why did I think I needed a pair? Well, despite the joys of minimalist running, my running had stalled of late. I was stuck in a rut and had convinced myself that the cure was more volume. Unfortunately, I was finding that when I increased my mileage my legs began to hurt and I would have to take several days off before I could run again. My overall mileage actually started to decrease. What to do? 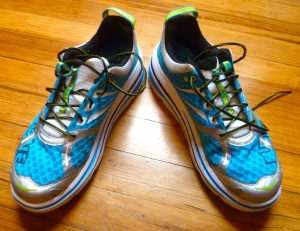 Hoka One One Bondi Bs

I bought (into) the Hokas. I have had them for several weeks and I can unequivocally say at this point that the reviews are true and the hype is real. I am not an ultra marathoner, nor do I have seemingly unsolvable chronic injury problems. Yet, I find the Hokas extremely useful. I don’t find that they make running all that much easier, but they make recovery I whole lot faster, which allows for more and better running. After I go for an eight to ten mile run in my Hoka One One Bondi Bs, my legs feel noticeably better immediately after a run (much less fatigued), as well as the next day. They don’t feel sore and beat down. I was concerned that the super cushioning of the Hokas would alter my running form and start me back on the slippery slope of heel striking. In fact, the Bondi Bs are my first true zero drop shoes and I found that it only took several hundred meters to get used to them. Despite the cushioning, there is actually some road feel and I found that they seemed to firm up over the course of a run. As everyone reports, they are absolutely fantastic for running down hill. They have a wide base and the super cushioning does a great job of absorbing downhill impact. I found them less ideal for going up hill –– the super cushioning feels like it is adding to the work. Some runners have reported upper tears in the mesh by the toe box. I haven’t had this problem and I suspect that Hoka may have addressed this problem in this version of the shoe. The upper is made of a durable mesh and has few overlays, as well as plenty of room in the toe box. This is a very comfortable shoe. The sole durability could be an issue. I immediately saw some wear in the midfoot area that is not protected by more durable rubber on the bottom of the shoe. It is fairly clear that I am striking a bit further back while wearing the Hokas. I still feel, however, that my stride hasn’t changed too much. I don’t have any chronic injuries, so I can’t speak to those who have used the Hokas to restart their running after years of not being able to do it. There do seem to be plenty of remarkable stories out there. I can say, however, that if you are looking to increase your mileage without overly stressing your legs, going the “maxi-minimalist” route with the Hoka One One Bondi Bs could be the way to go.

Fuel Your Future with Tina
My Beautiful Wickedness

A Funny Thing Happened On the Way to the Marathon...

omnirunning.com/
From the desk of Delton A Vereen

Daily musings and rants about my life, family, and job.

Smile! You’re at the best WordPress.com site ever

~ Wandering in a Running World ~

The latest news on WordPress.com and the WordPress community.